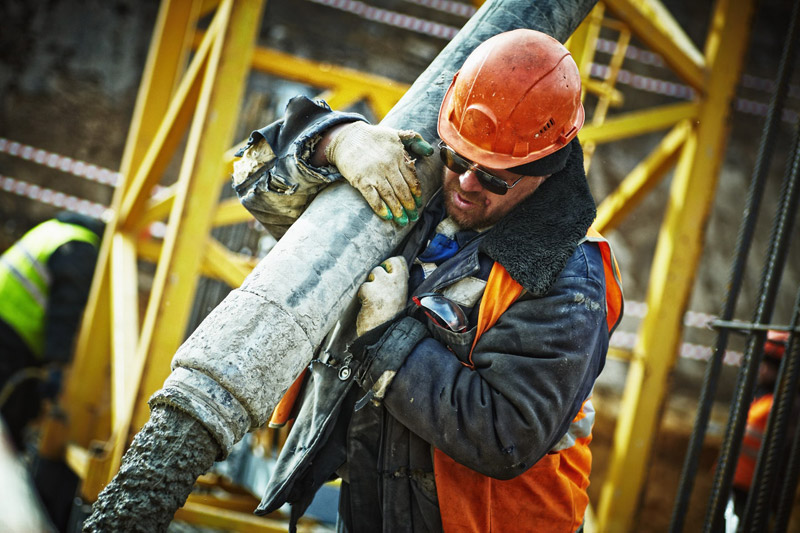 Anecdotal evidence from the Construction sector suggests bogus self-employment is rampant and growing as a share of employment in the sector. However, due to its nature, much of bogus self-employment occurs in the black economy, which raises issues around estimating precisely how widespread it is through individual level survey collection.

According to the UN’s International Labour Organisation, bogus or disguised self-employment has one of the highest associated risks of precariousness of any employment arrangement. This category of worker has the lowest income and the most household financial difficulty.  A worker is dependent self-employed if they are formally self-employed but work under the same conditions as employees.

In Ireland, a growing share of own-account workers employed in the sector may support anecdotal evidence of a trend. The latest figures from the Labour Force Survey compiled by the Central Statistics Office show a striking compositional change in employment in Construction since 2007. In effect, there are an estimated 1,300 more own account workers (self-employed with no employees) in the sector than in 2007 but 84,100 (or 46.6 percent) fewer employees. The share of own-account workers has risen from 13 to 22 percent in official statistics. This is over twice the rate of own account workers in the economy as a whole (9.8 percent Q1 2019), a rate which has not increased at all in the same period (9.7 percent Q1 2007). The Annual detailed enterprise statistics dataset paint a similar picture and allow international comparisons. The estimate for employee share in Construction in 2016 is 70.6 percent of persons employed. This is the lowest of the top ten high-income EU member states other than Belgium. Regulations around the classification of workers in Belgium are much more stringent however, with legal responsibility of correctly classifying workers lying with the principal contractor. 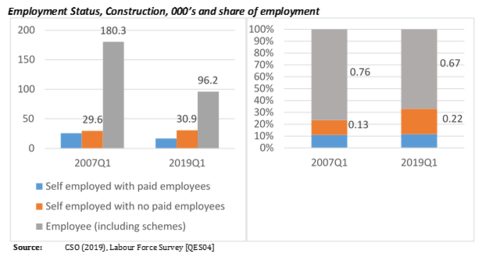 Revenue’s annual report might also point to a growing trend. Bogus self-employment encourages work in the informal economy, effecting government revenue receipts. Of 1,063 audits by Revenue in the Construction sector in 2016, 736 (or 69%) resulted in yields to the exchequer totalling €27.2 million. Site visits the same year (2,126) by the Joint Investigation Unit of the Revenue Commissioners to principal contractors resulted in 848 individuals registering as PAYE employees, and the reclassification of 345 sub-contractors as employees. In 2018, over €50 million was recovered by revenue from the sector and there were fewer site visits in 2018 (1,471) 492 individuals were registered as new employees for PAYE and 258 sub-contractors were reclassified as employees.

The misclassification of employees is in effect social welfare fraud. Legislation for the protection of employees does not apply to these workers, who do not benefit from employment regulations on working time, breaks, paid leave, minimum wage or termination. Neither do they benefit from employer social contributions. Employers may favour these arrangements to evade the labour and social protection contributions associated with employing someone. Choosing to employ workers in this way, employers can also avoid the costs of terminations and the financial risk associated with the possibility of a worker falling ill transfers to the worker. Health and safety prevention then becomes the worker’s responsibility, even with no control over their work environment. Employers can also evade legal responsibility in liability proceedings related to accidents or non-compliance of employees in health and safety regulation. Workers who are forced down this route are not entitled to social security protection unless they contribute as independent self-employed, requiring a higher level of contributions. In Ireland, own-account contracts are not subject to sectoral employment orders or minimum rates of pay and their earnings are significantly less than employees on average and have even been falling in an economy where employee wages have been rising, making contributions more difficult.

The same is true for pension entitlements and disability coverage. As these workers only have one employer they are subordinate, have no presence on the external market and thus have no alternatives for other business contracts and no autonomy over the manner in which they fulfil their side of the contract. These arrangements also have a disciplinary function, as the worker is dependent on the employer. These workers also have no option to employ their own staff, as genuine self-employed individuals would, making the relationship an employer/employee one in everything but name.