At the start of this month NISRA published its Annual Survey of Hours and Earnings for April 2020. This data offers us our annual opportunity to have a look at what has been happening in the economy over the year in terms of wages and of course, in the context of this year, it offers us the first opportunity to see the impact of the first lockdown period on pay and hours. This blog is one of a series of blogs which will be published over the next number of weeks which will analyse and comment on different aspects of this data. 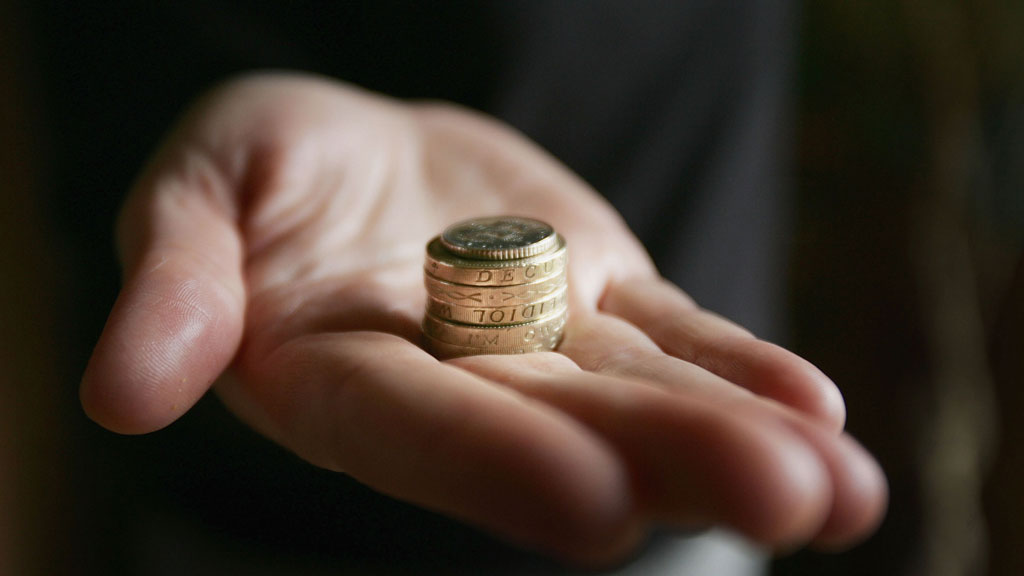 The latest ASHE data shows very starkly that low pay is starkly pervasive across our labour market. It also shows however how the burden of dealing with the Covid-19 public health crisis has not been shared equally across our workforce. Indeed, the ASHE data presented below show the very clear the stark occupational and sectoral nature of the crisis. It also shows how prevalent low pay is amongst some groups of workers – particularly younger workers.

Indeed, the ASHE data show that because many employees who were low paid to begin with  did not have their furlough pay ‘topped up’ beyond the Government subsidy of 80% of usual earnings has resulted in the fact that 10% of employees have hourly earnings which place them below the legal floor.

However, as will be outlined in this blog, the issue of low pay is much more pervasive than this. The reality is that 25% of employees in Northern Ireland have earnings below the real living wage. That is, the wage which is necessary to obtain a minimum acceptable standard of living. This is not a new phenomena. Indeed, it has got precious little to do with the Covid-19 crisis. Rather it has more to do with our longer term failure to take seriously the issue of low pay and ensure that the returns from work are decent and can sustain the livelihoods of workers.

What is low pay?

This past decade we have seen much policy discussion and political action around the concept and issue of low pay. In this regard, Chancellor Philip Hammond declared over and over again during his time in power that he was going to end ‘low pay’. To achieve this, he has stated that the aim was to have the national living wage reach 66% of median earnings by 2025.

This claim from the Chancellor was probably a mystery to most, and particularly the low-paid, as they pondered why he thought that having the national living wage reach this arbitrary line would solve their problem of low pay. Yet whilst this identification of low pay as being below 66% of earnings is an arbitrary line, it is one of the most commonly utilised measures of low pay. It is utilised by many international organisations such as Eurostat and the OECD to measure, track and compare low pay across countries. In 2020 two-thirds of the UK median gross hourly wage excluding overtime was £9.10, and so by this measure all workers earning below this level would be classified as low paid.

Still however, if the Chancellor is successful in reaching the target of having the national living wage reach 66% of median hourly earnings will he have ended low pay? Of course not. Not least because low-pay is about much more than a statistical artefact or an arbitrary line.

Moreover, low pay is about much more than the hourly wage rate. In this respect, you can have a very high hourly wage rate but still be low paid, if you only work a small number of hours. Consequently, we need to consider much more thoroughly how pay interacts with other aspects of the labour market to fully capture and appreciate what needs to be low paid and in turn what it takes to end low pay. So, while legal wage floors are vital for regulating the bottom of the labour market, they do not by themselves get rid of low pay – or ensure that work pays.

The extent of low pay

Figure 1 below presents the percentage of all employees who can be classified as being in low-paid employment using the different measures of low-pay identified in the previous section. We also present the proportions of workers below the National Living Wage, as well as the proportions below their appropriate legal wage floor.

From this we see that significant proportions of workers earn below all of the thresholds under examination. 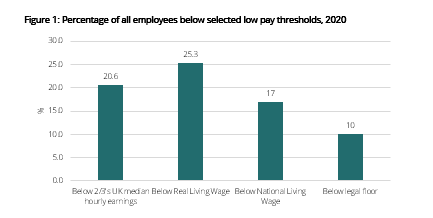 Who are the low paid?

Some workers are more likely to be low paid than others and concentrations of low paying jobs are found in particular sectors.

An examination of the data shows a presented in Figure 2 below shows, irrespective of which measure of low pay we look at, the extremely high proportions of low paid workers amongst those employed in the ‘Accommodation and Food Services’, ‘Arts, Entertainment, and Recreation’ and ‘Wholesale, Retail trade’ sectors.

- 80% of workers in the ‘Accommodation and Food Services’ sector earned below the Real Living Wage;

- 45% of workers in the Wholesale, Retail trade’ sector earned below the Real Living Wage;

- 40% of those in the Arts, Entertainment, and Recreation sector earned below the Real Living Wage.

Of course, whilst these are the sectors which have been most hardly hit by the lockdown restrictions, it is worth remembering that these same sectors faced high rates of low-pay before the Covid-19 crisis.

70% of workers aged between 18-21 earned below the Real Living Wage. Of course, this greater prevalence is partly related to the fact that the legal wage floor for these workers at £8.20 is below the national living wage threshold of £8.72. It is also related to the fact that younger workers were significantly more likely to be furloughed than older workers and not have their earnings topped up beyond the Government subsidy of 80% of their usual earnings. However, it also goes beyond this.

Indeed, as is clear from Figure 3 low pay is rife across all age groups. Almost 1 in 4 of those aged between 30-39 earn below the real living wage, and almost 1 in 16 of those aged between 40-49 do so. Obviously, this is partly related to the lockdown period, furlough and significant proportions of employees not having their usual earnings topped up, but we need not forget that it’s more got to do with the fact that low pay was such a prevalent part of our labour market to begin with. 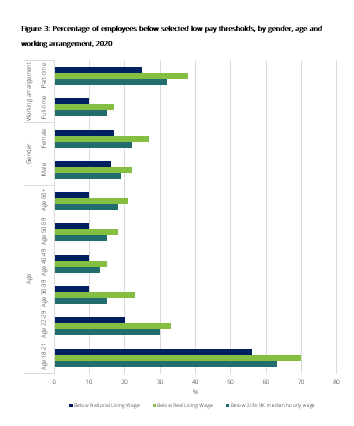 Low pay should be concerning to policy makers in Northern Ireland not only because of its pervasiveness right across our economy and its impact on that, but also because of the negative impact it has for the living standards of individual workers and their families.

Policies directed at increasing the wage levels of those groups of workers who are most likely to be low paid will be particularly beneficial to ensuring that work pays. Legal wage floors do provide one valuable tool for protecting and sustaining the wages of some of the most vulnerable workers.

That said, rather than only dice up this year high proportions of workers being below the legal wage floor as being the failure of the furlough scheme, more needs to be done to tackle the problem of low pay. In particular, efforts must be made to reduce the proportion of workers earning below the Real Living Wage and providing a minimum acceptable floor below which no worker should fall. Serious consideration needs to be given to using collective bargaining agreements and sectoral orders as an avenue to ensure decent pay and a decent livelihood for all workers.